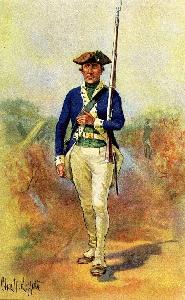 The beginning of this summary of the antecedents and lives of two American ex-soldiers and a Loyalist family who were pioneer settlers in Antigonish (in their day Sydney) County was sixty years ago. I spent two of my boyhood summers at a farm in Saltsprings, a farming district part hills and part intervale of the West River, as tranquil and beautiful a piece of pastoral scenery as Nova Scotia may boast. I was the guest of a paternal aunt and her husband, Mr. and Mrs. Frank Kinney, a couple who toiled from sunup to sunset on a subsistence farm, in the pattern of rural life as it was then. It was a hospitable home to where visitors came abundantly. Rare was the summer weekend when the spare bedroom was not occupied and the dinner table not crowded.
A boy of ten is impressionable. To this day I remember in detail the talk of my Aunt Irene and my grandmother, Harriet Jane Pushie Cameron (1850-1944), of relatives Hulbert, Williams, Pushie — my grandmother was all three of these — not to mention the connection of Cameron, Chisholm, MacMillan, MacGillivray, Dochenassie, Poison, Clark, Cunningham, Goodwill...the list is a long one, spread far, far, afield.
Gifted with a phenomenal memory she retained until a few months before her death at ninety-four, my grandmother "carried in her head" as her neighbours said, the family genealogy, and that of most of her neighbours, from the beginning of settlement in Antigonish. Knowledge of earlier generations in the United States and Scotland she did not have, nor to the best of my knowledge, was anyone reliably informed on this phase.
As much for my own pleasure as to correct this deficiency, I have pieced together from what sources I could accumulate an outline of the careers of Pushee, Williams, Hulbert, and their forebears. That my story is woefully incomplete and all too brief, I am the first to admit. It is, I trust, consistent with the information made known to me.
No words of mine need try to praise the names of Pushee, Williams, Hulbert. The pioneers lived out their lives on land they had turned from forest into farm. Their descendants progressed economically with the country. The great majority of them are now to be found in places distant from Antigonish; no small number took up residence and citizenship in the United States. Newfoundland to British Columbia, they are to be found in every Canadian Province.
As I have done with respect to my immediate family, whosoever will, may, with my blessing, undertake the task of assembling their own family tree.
Should the reader have half the enjoyment in reading as I had in writing, I shall feel amply rewarded for my effort.

An allusion to the folk in Nova Scotia s Antigonish County generally conjures a vista of a campus crowned by cathedral towers portrayed within a pastoral picture peopled by kilted Scots. It is not unjust to the Celtic legacy so abundantly manifest in name, speech and mannerism that persist to our time, to put upon the record facts which support the claim that the Scots - more numerous than others as they are in Antigonish — were chronologically later than the first pioneers there.
Ex-soldiers of disbanded British regiments unwanted after the loss of the American colonies in the Revolutionary War, and United Empire Loyalists, before the Gaelic was heard were clearing woods and breaking Antigonish soil. Two whose extraordinary careers in both General George Washington s and King George s armies, and a pair of Loyalist brothers, endowed their adopted country with a numerous and sturdy line of descendants. They were Nathan Pushee, Zephaniah Williams, Stephen and Gardiner Hulbert. There were more settlers from the former American colonies than these; our story is of only the four named, of whom two were great-great-great- and a third great-great-grandfathers of the writer's.
Pushie in the American colonial period was variously spelled Pushey, Pouchee, Pushy, Pusha, Pouchaway, and most commonly Pushee. In Nova Scotia it became Pushie. The name relates to the Huguenots, the Calvanist Protestants of France, many of whom, after more than a century of Frenchmen killing one another in the name of God, in the late sixteenth century after the St. Bartholomew Day massacre in 1572, fled in large numbers to other countries. Some crossed the ocean to the Carolinas, Pennsylvania and New York. From France some went first to England, and some of these and their descent to America.
The Plymouth pilgrims of 1620, who gave their name to the famous rock, had, in historians eyes, been influenced during their stay in Holland by Huguenot refugee neighbors. There was inter-marriage. Some Pilgrims referred to Huguenot forebears with Anglicized surnames, e.g., Paul Revere, son of Appolos Rivoire, a goldsmith who came to America via Guernsey. There was migration to the Massachusetts colony from Rochelle in France in 1662 and 1680, and by refugee families from the Island of Jersey in the 1670's. First generation Huguenots who settled in New England are estimated to number five thousand.
A family document 1(a) notes that the first of the name of whom to the best of my knowledge there is a documentary record, was "Gabriel Pushee of French antecedents, settled first in lpswitch, Mass." and there married July 26, 1726 Sarah Williams (no kin to Zephaniah Williams).
From whence came Gabriel Pushee 1st? The term "French antecedents" suggests he was not born in France. Some Huguenot families after settling in the American south moved to New England (e.g., the family of the Yankee patriot Paul Revere of Boston). That Gabriel was colonial-born is the more likely possibility.
Later he lived in Lunenburg, Worcester County, where in 1748 and ‘50 he was appointed "hogg reeve".2 He moved a few miles distant to Winchendon, and died in 1775. Gabriel and Sarah had a son Nathan, born at lpswitch in 1732, who married January 1757 Elizabeth Priest of Stow. Their son Nathan was born in Lunenburg, 1758. He was progenitor of the extensive Pushie family in Nova Scotia. Nathan had a brother, David, born 1760. who married Susanna Pierce and settled in New Hampshire, with numerous descendants.3
Likely Nathan's upbringing was in a modest home. The fact that he made good as a pioneer in Nova Scotia indicates he was no stranger to hard work and the skills of land-clearing when he came to the Province. Probably his exposure to an academic education was limited. His appointment of trumpet-major, a rank comparable to pipe-major, indicates that prior to military service he had at least a rudimentary knowledge of music, and talent. He seems to have been a typical member of the society of his time in an environment of resentment against the mother country s restrictive trade and tax policies for the colonies. He was a youth of seventeen when the Revolutionary War began with the events at Lexington and Concord. The records show that on June 27, 1775 he was a private in Captain Phineas Company of Col. Thomas Gardener's Regiment of Massachusetts Infantry.4
The lengthy military service of Pushee and Williams would have made them experienced soldiers. The fact that they re-enlisted in the American cause after their original enlistments expired, following upon battle experience, implies they were courageous. They fought in the northern and southern campaigns. When they bore arms to throw off what the rebellious Yankee colonists considered to be the British yoke, their's was a Spartan life, in which they would have known much physical hardship and danger. The American commissariat was inferior to the British. Arms, ammunition, and equipment compared to the well-fitted-out British were in short supply. The modern soldier is carried to the edge of the battlefield, or parachuted on it. In Pushee and Williams time enemies moved towards and away from one another by ship, horse, and shank's mare. The British moved their troops from New England to the South by ship, by virtue of the Royal Navy s mastery of the seas. Most Americans trudged the whole distance.

General Washington in 1779 ordered the dragoons to wear blue coats faced and lined with white. The headpiece was a leather helmet, ornamented with a fox tail, or bear fur, horsehair, or ribbons. A few sported French brass helmets, and from some source others had procured helmets of steel. They wore knee boots and spurs. Armed with a sabre, pistols, a short-barrel musket known as a carbine, and with his trumpet, on foot and horseback Pushee like his colleagues would cut a dashing figure. He had also the responsibility of looking after his saddlery, to keep himself and his horse clean, and feed both. Always in the cavalry the horses needs took priority over the men s. As a trumpeter he would ride immediately behind the formation commander, at whose order he would sound the calls which directed the men — "advance-trot-gallop, charge-retire, re-form, etc." The dragoons had miscellaneous duties, among these the supply of guards for the commander-in-chief and his headquarters. This was not a permanent assignment, but often Baylor's unit was known as "Mrs. Washington s Guards", which implies Pushee was one of the soldiers entrusted with protection of General George Washington. 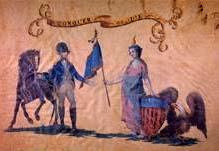 This Flag was carried by George Washington
bodyguards during the Revolutionary War.
It is probably the best example of the uniform
worn by that elite group of solders. This flag
is the property of Alexandria-Washington Lodge #22
and is currently displayed in the
George Washingtom Masonic National Memorial.

4"Massachusetts Soldiers and Sailors of the Revolutionary War". Compiled from the Archives, published by the Secretary of the Commonwealth, Boston, 1904.

5"Now We Are Enemies, The Story of Bunker Hill", Thomas J. Flemming, St. Martin s Press, New York, 1960, and "Historical Register of Officers of the Continental Army During the War of the Revolution April 1775 to December 1783", Francis B. Heitman with Robert H. Kelby, Baltimore 1973. Hereinafter referred to as "Heitman".

22"Timothy Hierlihy and His Times", paper by Charles J. MacGillivray, Editor of The Casket, Antigonish, N.S., read to the Nova Scotia Historical Society, Nov. 12, 1935. Hereinafter referred to as "MacGillivray".

25Letter to the writer 10 October 1980 from the Department of Archives, National Army Museum, London.

3lAlthough it was written, by a person whose identity is unknown to me, that Ann Scott Williams was a daughter of George Scott, a grantee of Truro Township, the book "Historical and Genealogical Record of the First Settlers of Colchester County", by Thomas Millar of Truro, 1783, does not warrant this statement. The Millar book, page 131, records that George Scott and wife had three daughters, Esther married to James Rutherford; Ann married to William Flemming and bore him a large family; and Elizabeth married to Thomas Dickey.

32Reproduced in "History of the Town of Antigonish ~, D.G. Whidden, The Casket Printing and Publishing Company Ltd., Antigonish, N.S.
1934. Hereinafter referred to as "Whidden".